The Legacy of the Vilna Gaon in Nineteenth Century Galicia

This research project attempts to examine the Legacy of R’ Eliyhau Ben Shlomo Zalman (1720-1797), knows as the Gaon of Vilna or the Gra (Hereafter, Gra) in the region of Galicia. I will attempt to outline the reception and influence of the ideas of the Gra and the attitude of other Rabbis, Maskilim and the masses to him, in his lifetime and immediately afterword’s in the early Nineteenth Century.

The Gra was one of the most famous figures in out History. His fame is because of numerous reasons among them incredible knowledge and originality in every area. His Son and Student R’ Avhrom, a great scholar in his own right testifies about his father’s knowledge in the introduction of the work Shenos Eliyahu as follows:

He learned, Bible, Mishana, Law Agadah, Safra, Babylonian & Palestine Talmud, Tosefta, all of which was perfectly clear in his mouth, on every verse he could show endless amount of laws… He edited printing mistakes that crept into Safra, Sifrim Tosfos, Pirkei De R’ Eliezer, Palestine Talmud Babylonian Talmud, Sefer Olam… He understands all areas of Kabbalah such as the Zohar….

Although this testimony sounds exaggerated, we find collaboration to it as the Gra’s Students who were known not to ever exaggerate in any way testified the same.  Further support to the authenticity of these claims can be found in the writings that he left behind in every area mentioned in R’ Avhrom testimony. Recently Yeshayah Vinograd printed an annotated bibliography of all the Gra’s publications including anything printed connected to the Gra, the listings number in the thousands. Worth pointing out at this what makes this number extra ordinary is that the Gra himself published nothing in his lifetime.

The Gra was discussed in numerous articles and full-length books each of which help understand different things related to him. However, Professor Yisroel Ta Shema points to a specific weakness in this literature:

In General, it focuses on his attitudes with Chasdim, Kabbalah, Eretz Yisroel and Messianic ideas in his times, and his place in the controversial Vilna of his time. But the most important aspect about him… is missing… to put him in place and his role in the Rabbinic world… in order to do this we need to have descriptions and impacts of the writings of other Leading Rabbinic figures of his time…

In this article Ta Shema mentions that academia has not spent enough time on people such as the Pnei Yeshuah, Shages Aryeh, Node BeYehudah and Ketzos HaChoshen. Since the time that Ta Shema wrote these words there has been important developments in the world of Academia dealing with the methods of these Rabbis and others from the same time. However currently there has not been much academic literature specifically devoted to the Gra’s methods specifically comparing it to others of his time. In addition to this legacy of learning has not been explored enough in academy literature.

Another Question which has bothered various academics related to the Gra is how exactly did he become so universally famous. Hillel Ben Sasson wrote a lengthy article on the subject many years ago. Emanuel Etkes has dealt with this a bit in his work Yachid Bedoro as has Saul Stampfer in various articles. Recently Eliyahu dealt with this in his book on the Gra called The Genius. All of these people have suggested interesting possibilities however this issue still requires further examination.

In this project, the purpose will be to examine in a specific region Galicia his reception amongst Rabbis, Maskilim and the Masses in his lifetime and immediately afterword’s in the early Nineteenth Century. The method will begin with examining and analyzing his writings to understand the uniqueness of his method of learning in various Halachic works of his such as the Biur HaGra, his work on Mishna and his Glosses on Babylonian and Palestine Talmud. After which to see if there was an impact of his ideas and methods.

In his lifetime we find the Sages of the Kloiz of Broide sided with him in the fight against the Chasdim. We also find in the Siddur of the Arizal printed in Zolkiew 1781that R’ Mordechai Zev, Chief Rabbi of Lemberg mentions in his letter of approbation: “in regard to printing the Siddur of the Arizal…. A few years back… with the approbation of the Gaon and Chasid R’ Eliyahu of Vilna.”

I will examine how did the sages of Brodie and Lemberg even hear about him. We can point to one figure who might help us understand this connection. Specifically, R’ Feiviel author of the Famous work Toldos Adam on R’ Zalman MeiVolozhin one of the important and greatest disciples of the Gra. R’ Feiviel also knew the Gra personally and later became the main preacher in Vilna. R’ Feivel also traveled to Galicia a few times and knew the sages of the Kloiz personally and received an approbation from some of them on one of his seforim. A bit later on he developed a personal connection with one of the most important Sages in Brody, R’ Ephrayim Zalman Margolis. There are also other possible conduits that the Sages of the Broyde Kloiz might have heard about the Gra which I will investigate.

After the Gra’s Death one can find a connection between Rabbis in Galicia and Rabbis tied to the Gra. One such example is R’ Pinchas MePlotsk who authored a few works and was one of the privileged ones to have met the Gra a few times. R’ Pinchas traveled and spent time in Broyde and Lemberg where he met the various sages there sucvh as the Yeshuyos Yakov, R’ Ephrayim Zalman Margolis and R’ Eliezer Landau. Another Galicianer Scholar, R’ Wolf Ber Shiff writes in his work Minchas Zichron: “thirty years ago I exchanged letters with the holy offspring the son of the true Genious…  R’ Eliyhau of Vina… especially with his Great son R’ Avhrhom…”. We also find that R’ Ephrayim Zalman Margolis previously mentioned had a few correspondences with the Gra’s grandson and student R’ Yakov Moshe Of Slonim. 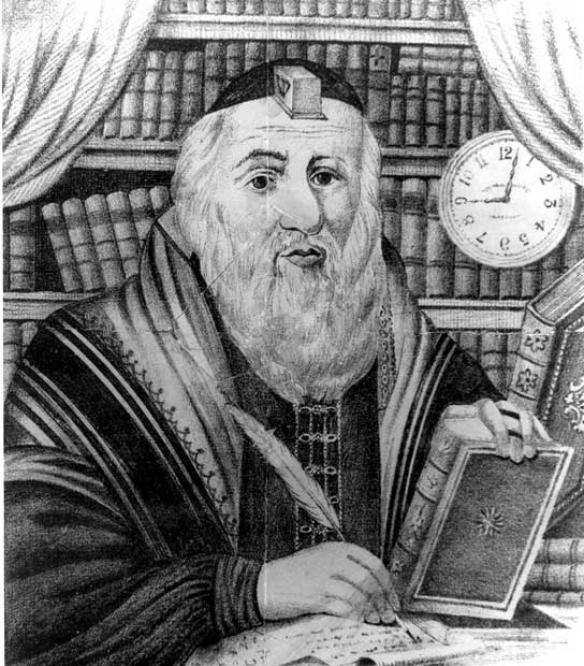 Not only do we find a connection between people who were students of the Gra and Sages in Galicia but we also find that they were involved in printing his ideas. For Example, one of the first works of the Gra printed was the Shenot Eliyhau on Mishna it was printed in Lemberg in 1799. In the introduction the Son in Law of the Gra writes “in the city of Lemberg… I found… in the Study hall of… R’ Eliezer Landau he spent a lot of energy with his students on this work…”. R’ Eliezer Landau was one of the famous scholars of Galicia in his time and became Chief Rabbi of Broyde a few years before he died. Also, worth mentioning is the letters of approbation of various Scholars of Galicia to this work. This was not the only work of the Gra that we find such a thing, the work TeHarot Hakodesh which is commentary on Tosefetah of Taharot was first printed in Zolkiew in 1804 and it also has letters of approbation from various important Scholars of Galicia.

In 1806 his glosses were printed in Vienna, R’ Wolf Ber Shiff mentioned above, testifies to his involvement in the printing of these notes. He also deals with some of them in his commentary. Also worth pointing out is the letters of approbations from various Scholars of Galicia to this work.

Not only do we find that Scholars of Galicia were involved in printing his works or that they gave letters of approbation but they also learned his ideas and dealt with it in their works. R’ Yakov Landau, son of the Nodeh BeYehudah, one of the most important figures on the city of Brody spent a lot of time on his ideas writing about them to his good friend R’ Ephrayim Zalman Margolis. Their Discussion can be found in the Responsa volume of R’ Ephrayim Zalman Beis Efrayim. In this section I will examine carefully some of these exchanges as one of them is very important in understanding how Megilat Esther is written and still has influence today.

We also find that R’ Ephrayim Zalman Margolis student, R Shmeriel of Hermilov deals with the Gra often in his work Iyun Tefilah. One can also find in numerous places in R’ Tzvi Chius various works, discussions about ideas of the Gra and even trace an influence of his methods on him. The same is true in the work of R’ Yosef Saul Nathonson and his Brother In Law R’ Mordechai Zev, Magan Geborim on Shulchan Orach where they disscuss the Gra often even referring to him with the title the “Genius, Godly Tana”.

I will also examine opposition to the Gra’s methods in Galicia. As I have found that R’ Shlomo Kluger of Broyde writes about the work Mishknot Yakov, written by one of R’ Chaim Volozhiner’s primary student sharply against accepting this work demonstrating that some were not accepting of the “Gra” method. R’ Kluger writes:

`        do not heed what the Mishknot Yakov, writes permitting because this whole work I do not find fitting as this rabbi choose a way to decide between early ones and to put his head between them (deciding) and this is not the way of the sages of our day we god forbid do not do so…

R’ Kluger appears to be referring to a tradition of the Gra which R’ Chaim Volozhiner writes in his name that one should not be scared to reach a verdict even if the conclusion is against the Shulchan Orach.

This is not the only opposition of a Galicianer Rabbi writing against the Gra. R’ Issac Sapirom of Kormarnah wrote a whole work against the Gra’s work on the Yerushalmi Shekalyim. This subject has been dealt with recently by Yakov Meir.

The Gra was also an important figure for Maskilim especially Maskilm of Galicia. Issac Ber Levinsohn, in his classic work Teudah BeYisroel which was written while he was living in Broyde, writes about the Gra positively a few times. R’ Zechariah Yelish another Maskil from Galiaic mentions him a few times in his work and even defends him sharply when others wrote against him.

Another work related to Haskalah which through it I will examine the acceptance of the Gra and the like. In 1824 a work of satire was printed in Vina called Kundos. This work describes cynically, numerous customs of the city in the form of a Halachic work written by the city trickster. According to Mordechai Zalkin the work was authored by Avhrhom Landau who was a native of Broyde and who moved to Vina. After his divorce he moved back to Broyde and wrote this book as revenge on the Vina.

Harris, Jay, How Do We Know This? Midrash and the Fragmentation of Modern Judaism, Albany:  State University of New York Press, 1995, pp. 234-239

Levisohn, Joshua, The Early Vilna Haskalah and the Search for a Modern Jewish Identity (PhD, Harvard, 1999)

Nadler, Allan, The Faith of the Mithnagdim: Rabbinic Responses to Hasidic Rapture, Baltimore 1997

Schocet, Elijah, The Hasidic Movement and the Gaon of Vilna, New Jersey 1994

Stanislawski, Michael, Tsar Nicholas I and the Jews: The Transformation of Jewish Society in Russia, 1825-1855, Philadelphia:  University of Pennsylvania Press, 1983

Weinstock, Neil, From Maimonides to Microsoft: The Jewish law of Copyright since the Birth of Print, Oxford 2016