The Halachic Authorities of Galicia Against a Changing Reality

With the arrival of the modern period, life has changed beyond recognition. This influence is felt both in the occupational shifts and in the technological innovations that came as a result of the industrialization this period brought to the world. The Jewish community was not immune to these immense changes. They created significant challenges for halachic authorities and forced them to consider new halachic solutions for complex situations – all while under the influence of the Enlightenment and the secular movement, which were gathering momentum at the time.

Our research project explores how halachic authorities of Galicia related to the changing reality of life during the second half of the 19th century. We will review the halachic dilemmas surrounding the changes of the period, and attempt to sketch the outlines of their various approaches to each dilemma.

The first study examines a halachic dilemma that arose as a result of the new opportunity for Jews to purchase ownership of large estates in Poland. It is known that the Sages forbade having a non-Jew do work for a Jew during Shabbat, and this meant that Jews could not allow their businesses to run on Shabbat, even when it was serving non-Jews. Over the generations, various unique circumstances arose that required Jews to allow non-Jews to run their businesses to avoid financial loss, and in these cases, halachic authorities relied on heterim that were drawn from the Talmud and the Rishonim. However, at the dawn of the modern period, this problem became more widespread due to the new reality of Jews becoming owners of large estates, some of which even included factories.

This study focuses on the approaches two major halachic authorities from Galicia took regarding this issue. The first is Rabbi Shlomo Kluger of Brody. We chose to focus on this figure because of his centrist placement on the halachic spectrum during that period. Rabbi Shlomo Kluger was among the eminent halachic authorities in Galicia during the 19th century and his authority extended throughout Poland, Hungary, Romania, and other areas. The second figure is Rabbi Chaim Halberstam from Sanz, who also served as an important halachic figure in that period alongside his role as a Hassidic rebbe of great influence in Galicia and Hungary. The conflict between the approaches these two figures took on this issue provides a window into the mindset and the thought processes of a traditional posek on the one hand, and a Hassidic tzaddik on the other.

The second study carried out as part of this project explores a subject that generated a great deal of controversy in Galicia for a period of 150 years: the heter to sell livestock to a non-Jew during Pesach, in order to make it permissible to eat those animals with chametz. The first section of the article deals with the innovation of Rabbi Alexander Sender Schor, author of Tevuos Schor from Zhovkva, that forbids this type of sale as it constitutes ha’arama(forbidden circumvention of halacha), and concludes with the spread of this prohibition throughout Galicia and outside it in the century that followed.

The second section of the article deals with Rabbi Shlomo Kluger’s contemplations on this topic, since the modern period – as we argue in the article – lies at the root of this change.

Another article will examine the question of canceling the second day of Yom Tov. This topic was the focal point of a dispute with the Reform movement at the beginning of the 19th century in Germany and Hungary, but responses to it have been found among both Enlightenment and rabbinic factions in Galicia as well. These responses can teach us about the way those individuals thought about new questions that occupied the minds of the Jewish community in that period. 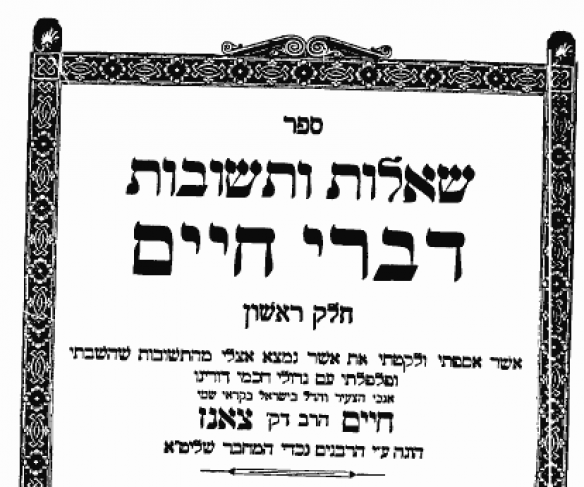