Rabbi Michel Morawczyk: A Chapter in the Writings of an Unknown Author and His Polemic Against Rabbi Moshe Isserles

In his seminal article, the eminent historian of early modern Polish Jewry, Elhanan Reiner, analysed the universalist halakhic approach of Rabbi Moshe Isserles (“the Rema”), which detached itself from the traditional localised approach of latter Medieval Ashkenazic halakhists. Reiner identified this change as reflecting a shift from the smaller “holy communities” to the larger urban communities. The Rema, who lived in Krakow in the mid-16th century, embodied more than anybody else the beginning of a new era in Ashkenazic Jewish culture. His great project was to reformulate the halakhic framework and consciously work to erase the numerous halakhic differences between the customs of a rainbow of Ashkenazic communities. In line with the Zeitgest which encouraged subversion of authority and tradition in all areas of life, the Rema laboured to achieve a radical return to ancient literature which held sway across a larger expanse of the Diaspora, while shunning the authority of the more recent local Ashkenazi customs.

As one might expect, the Rema's approach was not unquestioningly accepted. The most explicit public opposition came from Rabbi Chaim ben Bezalel, who studied with the Rema and lived in Friedeburg, Germany. His eloquent criticism appears in Vikuah Mayim Hayim, an entire work devoted to the matter, through which we can gain an understanding of the premises that guided the Rema in his venture and shed light on the significance of his work at that time. Though this critique has been given extensive consideration in the research literature, its full significance has yet to be unravelled.

This research project seeks to describe and investigate a quietly voiced criticism, barely made heard in Krakow itself, found in the works of Rabbi Michel Morawczyk. Operating on the fringes of the Bet Midrash, Rabbi Michel printed at least four Torah works. Though not of great value in terms of their contents, these works give us a glimpse of his unique voice, a voice speaking for an author belonging to Poland's “secondary” intelligentsia. As characterised by Haim Hillel Ben-Sasson, Rabbi Michel was “one of the great Jewish ethicists of his time”, who proudly and unabashedly carried the torch of Ashkenazic culture and tradition. His criticism of the developing changes in his new land of Poland in the fields of halakha and culture was veiled, hesitant and incoherent, and expressed in a highly muted fashion, even as those changes destabilised familiar ways of life. 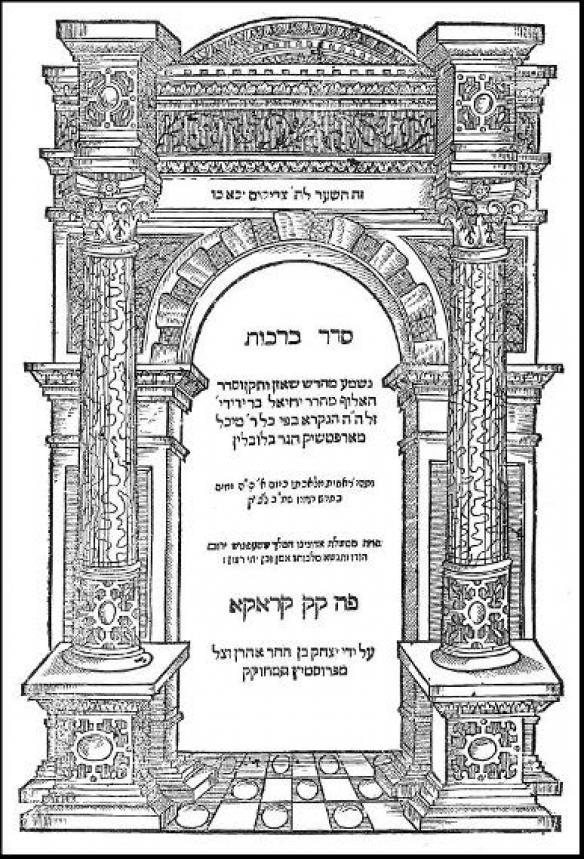 Rabbi Michel's famous work, Seder Berakhot, was printed in Krakow in 1582, just two years after Rema's glosses to the Shulhan Arukh were published by the same printing house. On the front page of the booklet, the author is described as “Morenu HaRav Rabbi Yehiel Bar Yedidya – may his memory bring life in the world to come – known to all as Rabbi Michel Morawczyk who lives in Lublin”. The booklet is mainly a summary of Hilkhot Berakhot (the laws of blessings). It owes its popularity to the fact that Rabbi Avraham Abele Gombiner, working in Kalisz in the 17th century, made use of and referred to the booklet several times in his Magen Avraham, a major commentary on the Orah Hayim section of the Shulhan Arukh.

Besides this famous work, Rabbi Michel Morawczyk published another three treatises. The earliest of them is Minha Hadasha, a collection of commentaries on Pirke Avot (Ethics of the Fathers), printed in Krakow in 1576. In the last seven pages, there is an appendix of “Likutim” (collected works) – a sort of “notepad” document of quotations from the Zohar and other Kabbalistic literature, along with other fascinating items. To a certain extent, these Likutim correspond to the second section of Seder Berakhot, in which the author abandons the declared aim of the book and proceeds to introduce seemingly random discussions and quotations, apparently without order or thought.

Between Minha Hadasha and Seder Berakhot, in Krakow in 1579, Rabbi Michel published a Grace After Meals booklet with commentary, assembled in large part from the commentary of Rabbi Nathan Shapira of Grodno, who had died two years earlier.

His other publication, a compact pamphlet of just six pages, lacks a title page and therefore its publication date is unknown. This work is a Hebrew translation of a chronicle of the edicts of Vienna whose version in Yiddish was widely circulated.

Apart from the few footprints left in his literary output, we have no information about the author. His writings hesitantly convey, in a sub-textual manner yet consistently, disapproval of the cultural transformation in Torah study and halakha in Poland. This criticism is at the heart of my research, which intends to decipher its objectives and reveal its origins.